COVID-19 - Please note that due to social distancing measures, some resort and property facilities may be unavailable at the time of your visit. For the latest information please see our FAQ page here
calendar_today

The relaxing Sauchope Links holiday park is situated on the rugged coastline of the East Neuk of Fife, an area of Scotland noted for its beautiful beaches, striking seaside scenery and traditional fishing villages, including the charming harbour settlement of Crail which you can find just a few minutes’ walk away from the resort. Sauchope Links Park boasts some truly stunning views across the Firth of Forth to the beautiful Isle of May, and makes a perfect place to stay if you’d like to explore this superb stretch of Scottish shoreline.

Accommodation on site includes a range of luxurious lodges and glamping pods, many of which come complete with private hot tubs to add a touch of pure relaxation to your stay. Dog friendly properties are available, too, if you’d like to bring along your pet to enjoy a seaside break. And you’ll also find a variety of fantastic shared on-site facilities to make your holiday at Sauchope Links really special.

Sauchope Links is right by the sea, with amazing views and plenty of beaches and coastline to explore. Take a stroll by the waves, hunt for fossils, watch the birds, and enjoy the seafront surroundings.

If you’re in the mood for a dip, the resort has its own heated outdoor swimming pool for guests to enjoy. The pool is open from the end of June throughout the summer months, weather permitting.

The resort has an indoor recreation room with a pool table and table football game, a great way to spend a few hours. There’s also a children’s play area where little ones can blow off some steam.

For those everyday holiday essentials, Sauchope Links has its own small on-site shop. For a wider range of stock, a ten-minute stroll down the coast will take you to a handy local supermarket.

Close to the Village

A few minutes’ walk from the resort is the traditional fishing village of Crail, with its cobbled streets and little harbour. It’s just one of the gorgeous historic seaside villages to be found in the East Neuk of Fife. 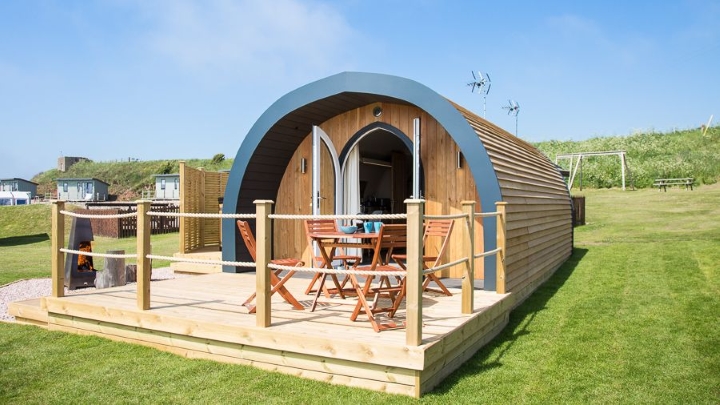 Why stay at Sauchope Links?

With a stunning coastal location in the East Neuk of Fife, Sauchope Links is the ideal destination for a Scottish seaside holiday, with beautiful scenery and plenty of pretty fishing villages to explore. That’s not to mention the many lodges and pods with luxurious hot tubs, well as some top-notch on-site facilities.

Please note: due to the COVID-19 pandemic, the attractions and amenities shown below may be closed or only offering a limited service. Please check their individual websites or call them ahead of time to avoid disappointment when visiting.

Isle of May Nature Reserve 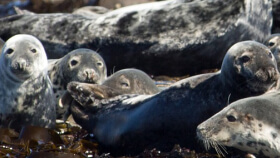 Visible from Sauchope Links, the Isle of May is a nature reserve in the Firth of Forth which is home to nesting seabirds, including puffins, and a large colony of grey seals. You can pay a visit to the island from April to September by taking a ferry ride from the nearby town of Anstruther. 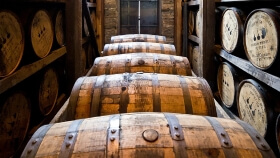 There's nowhere better for lovers of whisky than Scotland, and a visit to the 5-star Kingsbarn Distillery, with its fantastic visitor centre, is not to be passed up. There are three different types of distillery tour available, as well as the customary tastings and a café serving delicious local food. 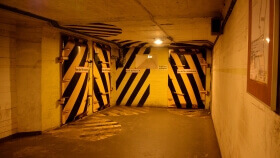 Subtly situated in the Fife countryside, Scotland's Secret Bunker is a former Cold War military command centre built in 1953, 100ft beneath the ground, in preparation for a potential nuclear war. It's now a tourist attraction so you can explore the history of this hidden installation for yourself. 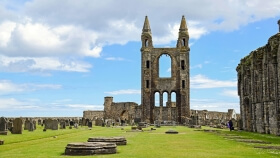 Sauchope Links is less than a 20 minute drive from the town of St Andrews, known for its many outstanding golf courses and its connection to the origin of the game, as well as historical sites such as the striking ruins of St Andrews Cathedral and the remnants of the medieval St Andrews Castle.

For Food and Drink 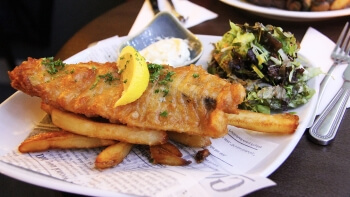 The seafront location of Sauchope Links is likely to put you in the mood for seafood, and if you fancy fish and chips you can't beat the Crail Fish Bar & Cafe in nearby Crail, a local favourite. Further down the coast, the Anstruther Fish Bar is known as one of Scotland's best. 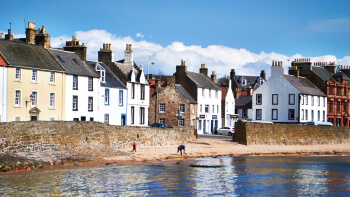 The East Neuk of Fife is famed for its charming fishing villages and coastal towns. Follow the Fife Coastal Path from the nearby village of Crail and pay a visit to Anstruther, Pittenweem, St Monans and Elie and Earlsferry, each of which has its own unique charm and is worth exploring. 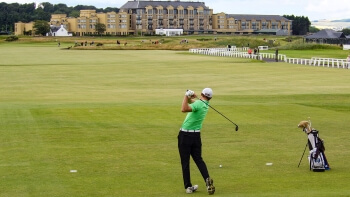 Scotland is well known as a golfer's haven, and just a couple of miles away are Crail Golfing Society's two courses, Balcomie Links and Craigshead Links. A little further afield is Kingsbarn Golf Links, and of course you can head to St Andrews, the 'Home of Golf', for more. 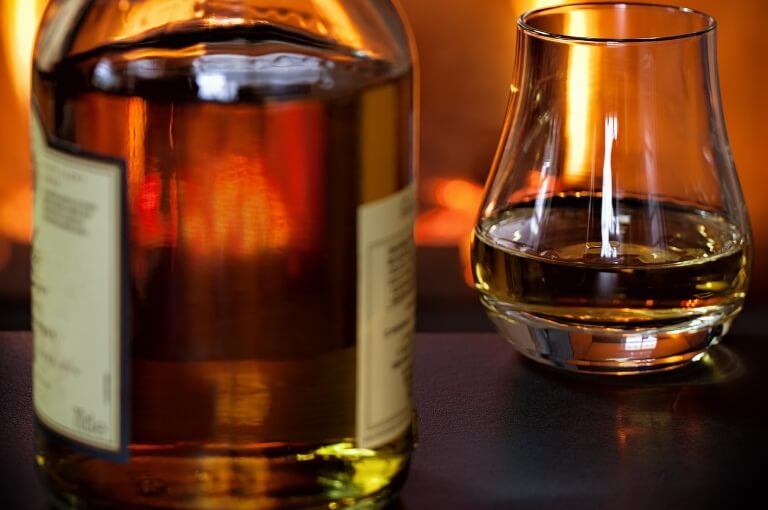 Where to Taste Whisky in Scotland

Any whisky fan would jump at the chance to pay a visit to a real Scottish distillery, and with so many tempting taster tours on offer, it can be hard to choose! To make it a bit easier, here's our guide to some of the best around. READ MORE 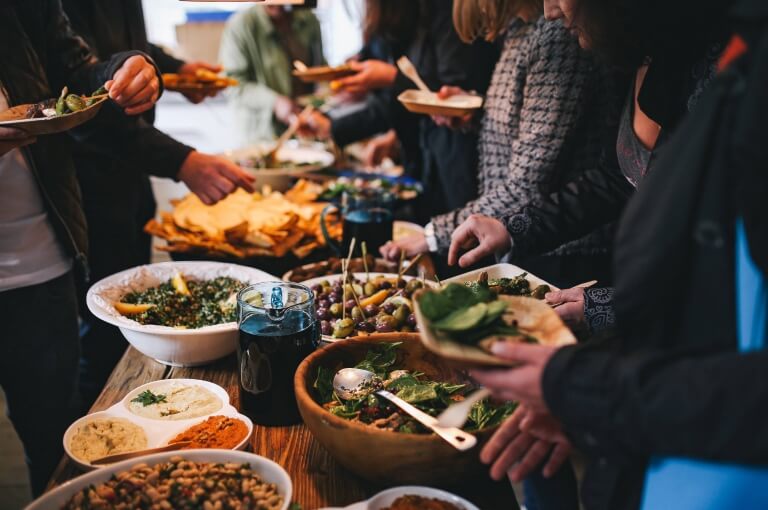 Whatever type of food you're a fan of, you can be sure there's a UK food festival for you. Enjoy delicious traditional cuisine or savour something with more of a modern twist - here's our tips on where you should go. READ MORE 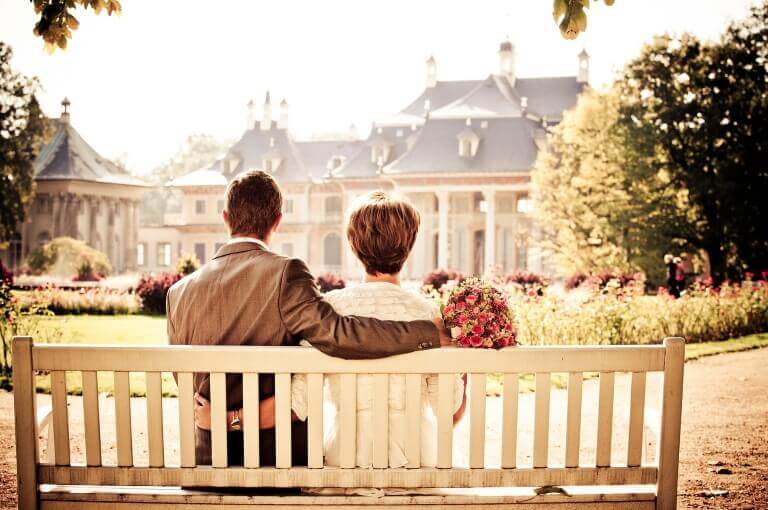 Seeking something special for a romantic occasion, such as a Valentine's Day break, an anniversary celebration, or just a chance to spend some time alone together? Hit the right atmosphere with a visit to these gorgeous locations. READ MORE
Previous Next